Sign up by September 30th to get 20% off our Pro plan for your first three months. Find out more.
About Partners Log in
Skip to content
Resources Hub

It’s been a meetup-packed month for me. 7 in a month, my highest so far!

Wednesday the 9th was the first meetup – AWS Programming and Tools meetup and was hosted at MessageMedia. The topic of the evening was “Using Packer and Vagrant in AWS” and the event was more of a hands-on type meetup rather than a sit-back listen type one. The pizzas had arrived (as per meetup ritual) soon after the attendees started trickling in and were demolished within minutes. With their tummies full, the hackers took their spots armed with MacBooks and Windows laptops. Norton kicked off the meetup by introducing the tools and getting everyone familiar with the concepts. 20 minutes in and some were sailing through the tutorials while the others were still struggling to set up their environments. The coding sesh concluded with the attendees going home with a better understanding of Packer and Vagrant.

The following Wednesday was the second meetup – JuniorDev Code & Tell and it was hosted at Zendesk. The speakers were Olga Goloshchapova, Terence Huynh, and Nathalia Tan. Olga talked about why a senior developer might seem like a programming wizard to a fresh developer and she shared some tips and tricks on how a struggling junior developer can learn and pick up things faster. The second talk was about React Native. It was interesting to hear about the weird quirks and complexities of the infamous Javascript framework and the approaches taken by Terence’s team to overcome some of the obstacles. I was quite intrigued to know that Terrence had founded Unihack, the largest university hackathon in Australia. Pretty cool stuff! The final talk was crafted towards young developers looking to grow and take on more responsibilities. Nathalia spoke about how important both hard and soft skills can be especially when you’re making the transition from university into the industry. 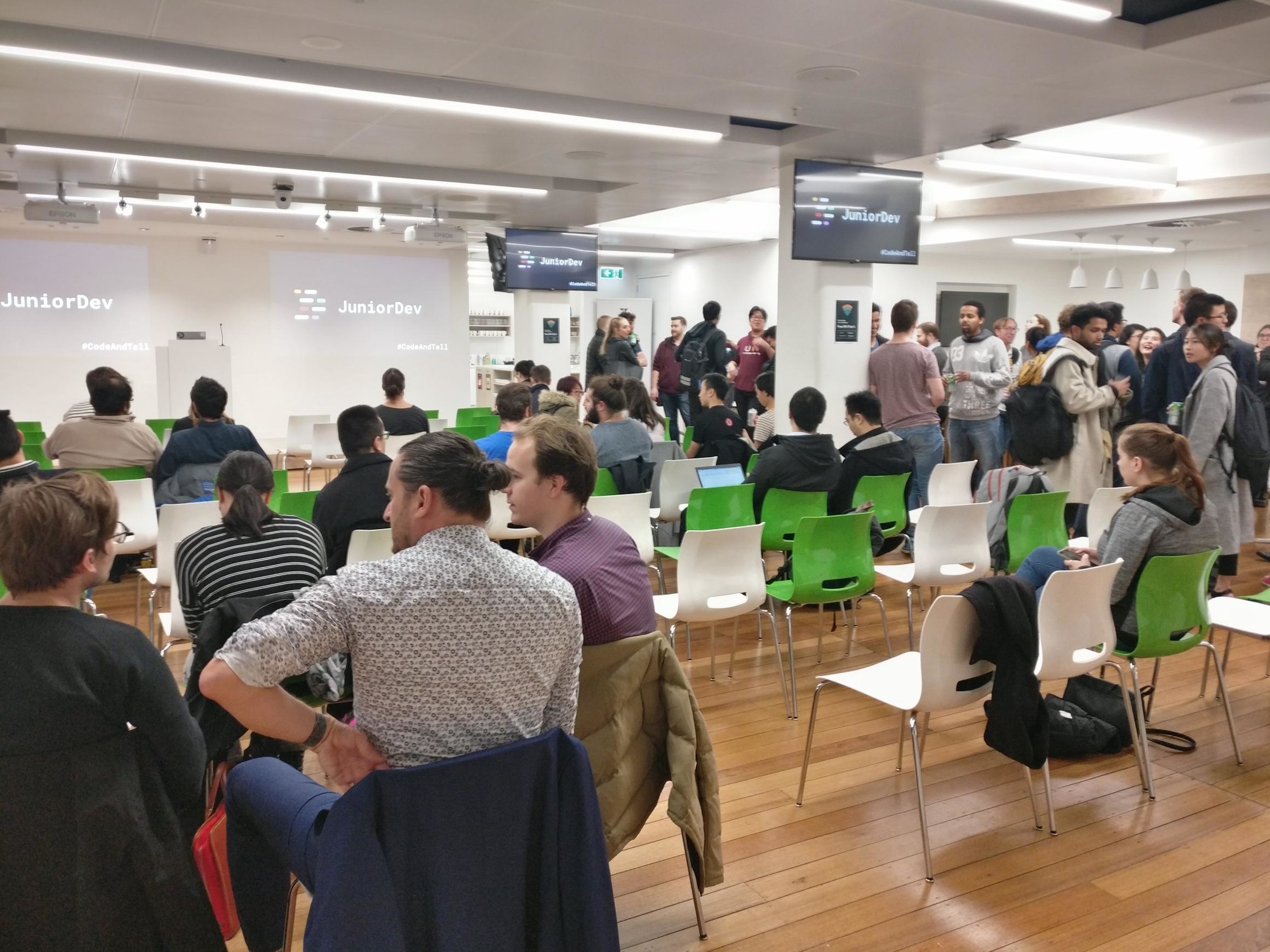 The next day, I attended the Offshore and Distributed meetup which was held at MessageMedia. The speaker of the night was Ben Mostafa and the topic was “Successfully Onboarding an Offshore Team with a Phased Approach”. Ben, currently an engineering manager, talked about the role he played in onboarding an external tech team and the approach that was used to do so. He discussed the strategy, tactics and the different stages that were involved and how the external team was introduced to each one, how they had settled into the tech team’s practices. 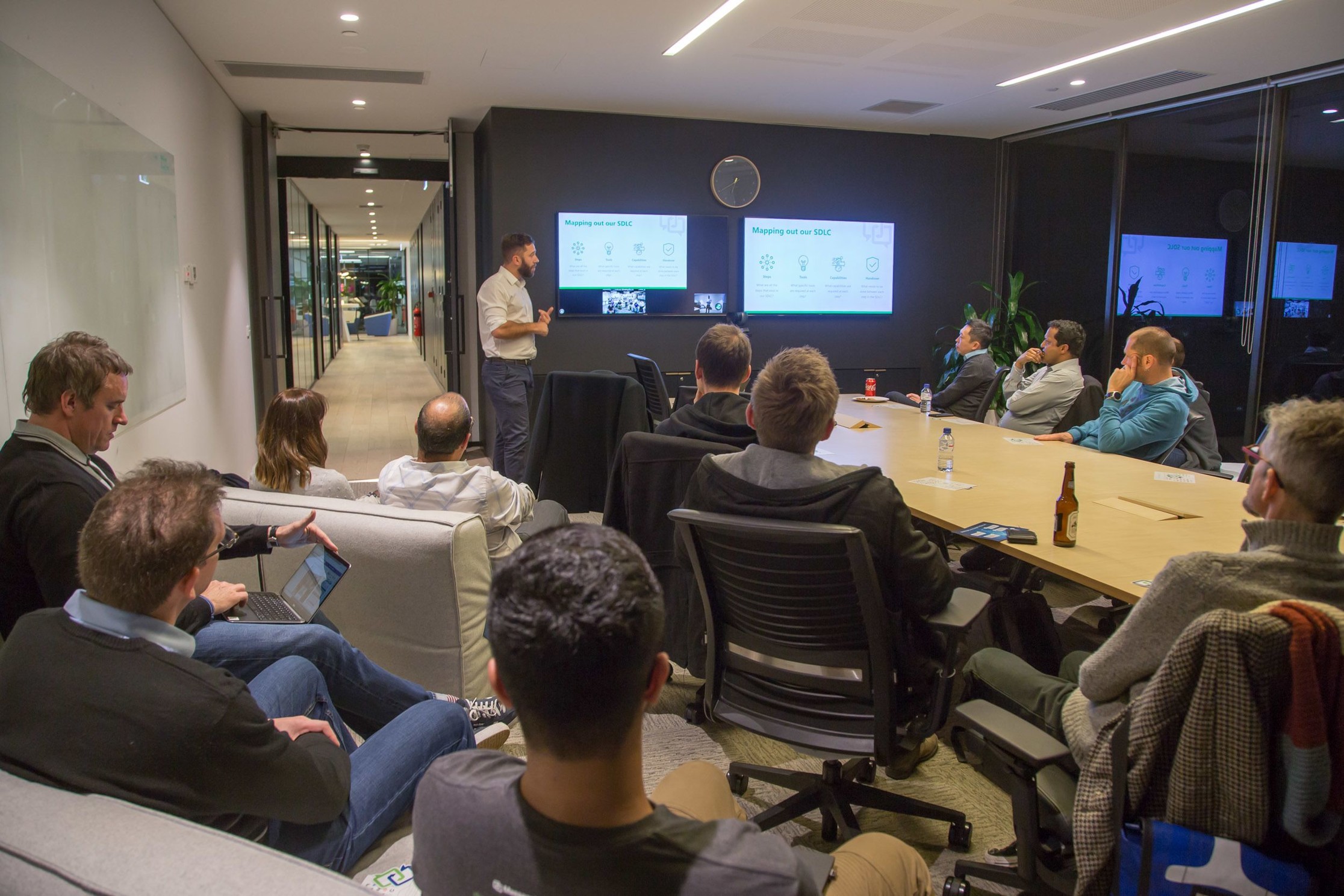 Wednesday the 23rd was the fourth meetup – Melbourne Front-end Development meetup, hosted at RXP Services and run by the folks working there. The first talk was by Paul Binns. He explained the concept of closures and proved how they’re being used almost everywhere in Javascript. Paul did a great job at simplifying the concept and used examples that were easy for everyone, regardless of experience, to understand. The next talk was on Flexbox by Mike. He emphasised the importance of Flexbox when it came to layouts, how it compared to the tools of the past and why we should use it especially since browser support is so pervasive. 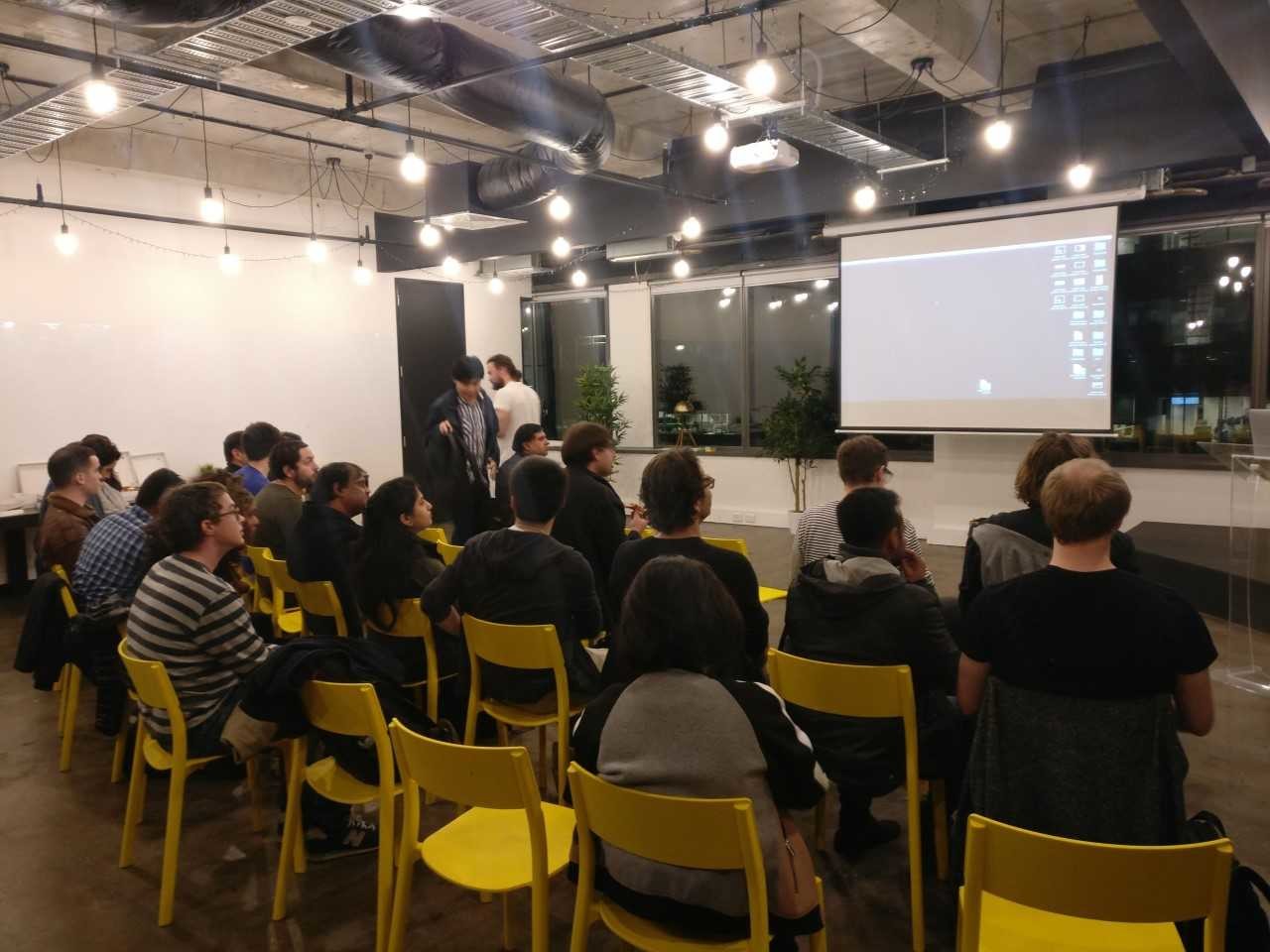 Next on my list was the Melbourne AWS Meetup which was hosted at MessageMedia and run by Peter Dunn. The first talk on jHipster was presented by Gerard Gigliotti. He spoke on how jHipster moved from being an opinionated generator to an opinionated development platform, generator implementations and areas of improvements. Michael O’Brien, CEO/Founder SenseDeep a security startup, was the next speaker. His talk revolved around securing services on the cloud giant AWS when you’re running on a tight budget and don’t have an internal team looking after and maintaining the security of your services. 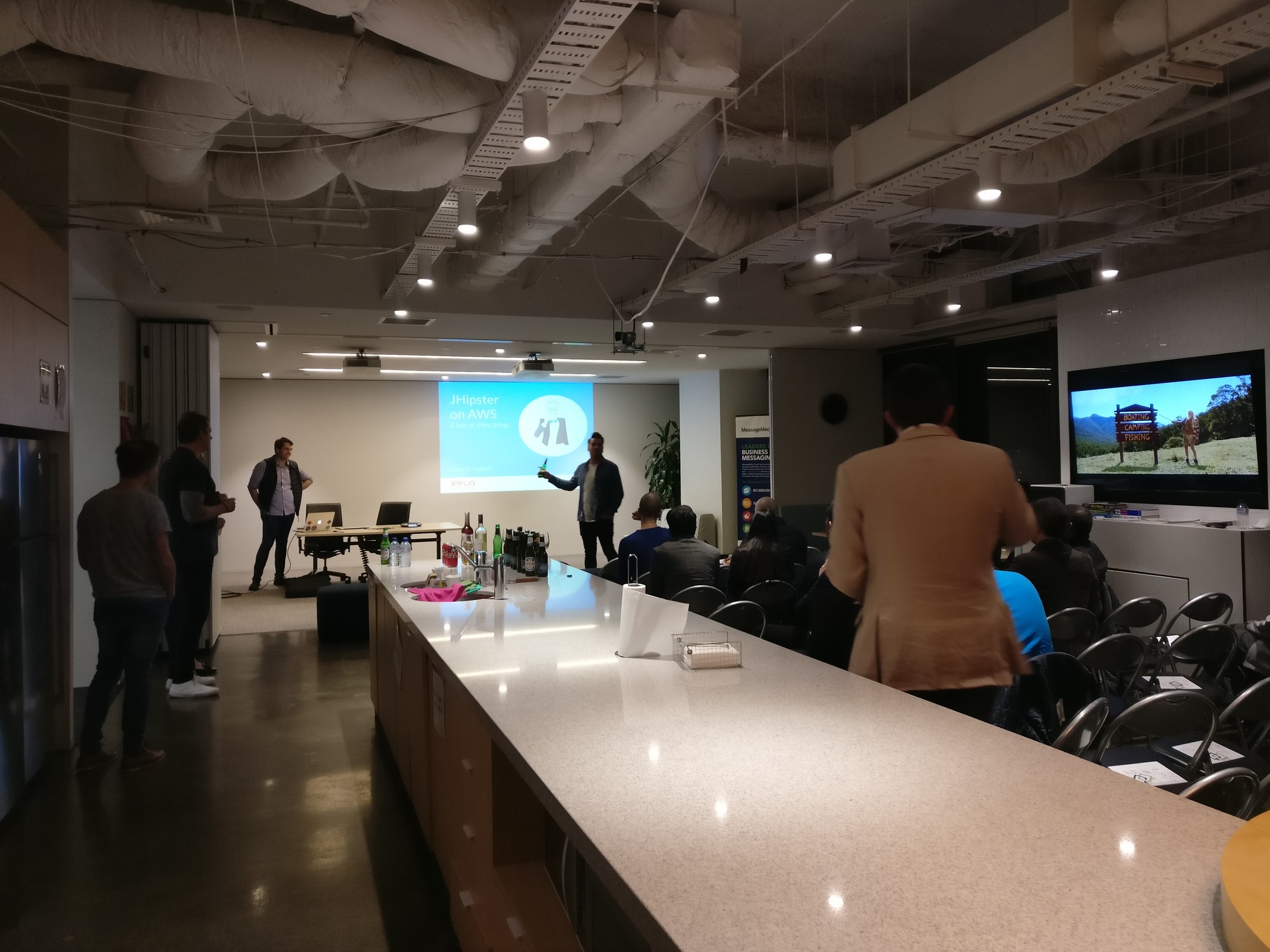 The next meetup was called Devops Melbourne and was hosted at Thoughtworks. Fabian Iannarella was the speaker of the night and the talk was on DevOps being a journey. Having 17 years of experience in the industry and being a DevOps Practice lead at 460degrees, Fabian knew a thing or two about what DevOps is. He spoke about DevOps being a universal concept that can be applied anywhere given the right approaches and mindset. He introduced the attendees to methods that they can use to begin their DevOps journey with the organisation.

And finally, the last meetup of the month was the Melbourne Ruby meetup hosted at Zendesk and run by Toby and Ryan Biggs. Louka Ewington-Pitsos kicked off the night by talking about how to web scrape. His presentation covered what he learnt over time about web scraping with Ruby, the dos and don’ts and some quick hacks on how to get things done in a fairly short period of time. Next up was Michael Morris who wowed the crowd when he demonstrated the system he built using Ruby and Mario Kart. Yes Mario Kart! It covered a fairly unorthodox use of Ruby but was quite fascinating nonetheless. The final speaker was Tian Chen who introduced everyone to his open-source project called Wallaby. He explained how Wallaby is a Rails engine for managing data and how it can be easily and deeply customised in a Rails way using decorators, controllers and views. 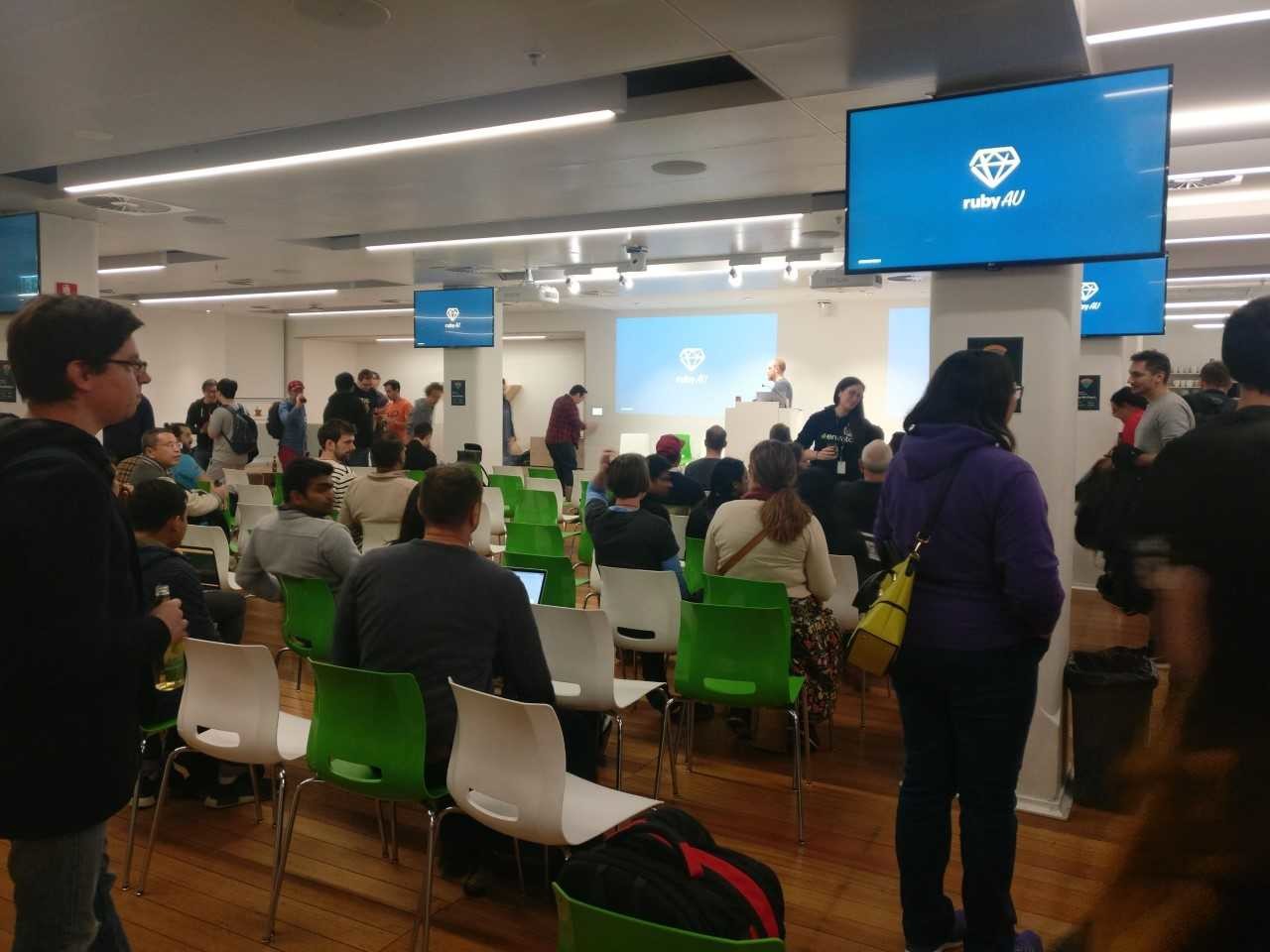 Supercharge your marketing with SMS automation